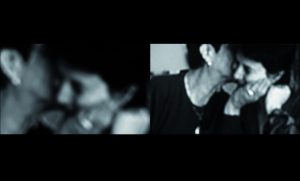 From June 1rst to August 30th Eye Filmmuseum is proud to present a major solo exhibition of work by Chantal Akerman. In 1995, the Belgian filmmaker created a large spatial installation on 24 monitors based on D’Est, a film she originally made as a documentary. This was only the start of her second career in the world of visual art.

The exhibition hosted by EYE Filmmuseum features eight of Akerman’s film installations. They include among others the previously mentioned D’Est,  Woman Sitting after a Killing (2001), Tombée de nuit sur Shangai (2007-2008) and her final work NOW (2015).

The exhibition is accompanied by a pubblication with texts by Chantal Akerman herself and essays by Cyril Béghin, Dana Linssen and Roos van der Lint.

To accompany the exhibition, EYE presents a program of Akerman’s most influential feature films and documentaries, as well as a documentary about the filmmaker. A series of guests will examine different aspects of Akerman’s work during special thematic evenings.

Film screenings are made possible with the help of Cinémathèque royale de Belgique.

For more information on the exhibition and a full program of the screenings, click here.