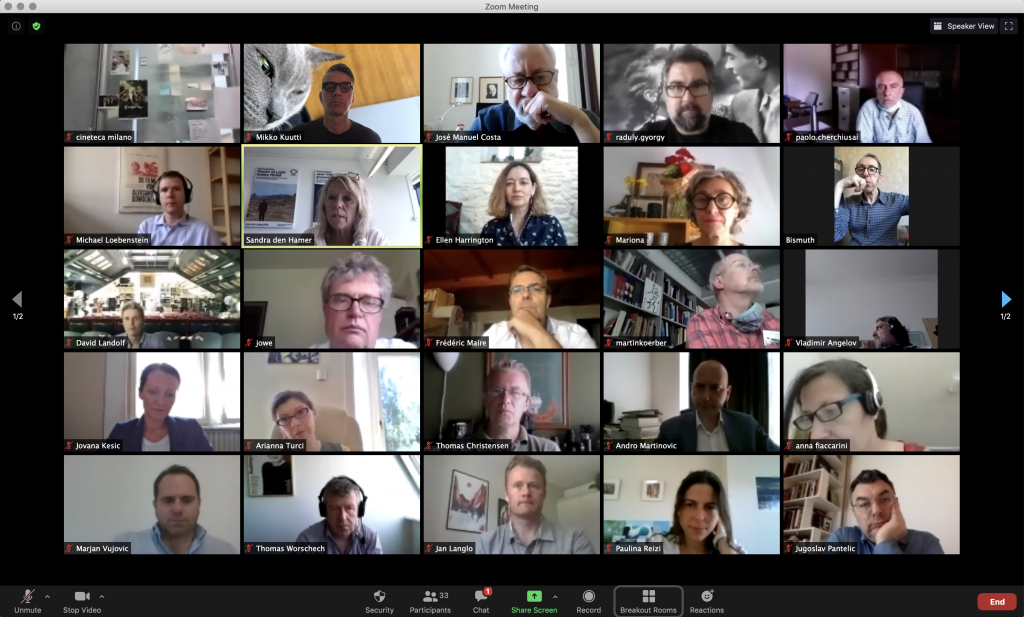 Sandra Den Hamer began the assembly by thanking Nicola Mazzanti, the former ACE president who had been in the board committee for many years. Sandra quoted a letter that Nicola has addressed to the Committee, in which Nicola wishes the association a bright future. Sandra has also thanked Mariona Bruzzo Llaberia for her work in the committee from 2016 to 2020. Mariona has decided to not accept a new term, but will always be available for the association.

2020 is a year of renewal of the Board of the associations and for the first time the elections won’t take place in person. Thank to the support from FIAF, Ace has been able to use a voting engine that makes the online votes anonymous.

The assembly approved the activity report and the results. Then, the candidates for the executive committee introduced themselves to the assembly.

At 3 PM the electronic vote closed. Here you can view the results of the election.

Matej Strnad and Michael Loebenstein updated the assembly on the status of the project promoted by the PACC Commission in collaboration with ACE focusing on the negotiations with distributors of classic films (such as Park Circus). The project prompted a big discussion.

Anna Fiaccarini has invited everybody to the next edition of Cinema Ritrovato. The festival preparation is focusing on complying with safety regulations. Anna has also updated the assembly on the development of the website and on the future activities planned under the Mikku Kuutti’s guidance and with Giada Sartori’s help.

The new Board committee then reunited at 4.15 PM to nominate the officers. Sandra Den Hamer has been reconfirmed as president, Michael Bregant as treasurer and Mikko Kuutti as Secretary General.

The GA minutes will be soon available in the Members’ Area.