At the end of May, Eye would traditionally have been the scene of the Eye International Conference, this year hosting the 12th Orphan Film Symposium dedicated to the theme “Water, Climate, and Migration”. Due to the COVID-19 pandemic, the symposium had to transform into a completely virtual event. 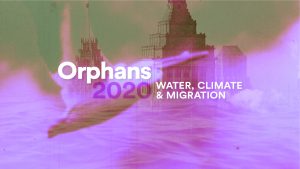 Orphans & Eye
The Orphan Film Symposium is a renowned bi-annual gathering that has been celebrating abandoned and forgotten films since 1999. Since its first edition, the Filmmuseum has contributed to Orphans. Eye and New York University planned for nearly two years to have the symposium convene again in conjunction with the Eye International Conference.
After a successful first European edition in Eye in 2014, with over 200 international guests from thirty countries, Eye was looking forward to welcoming again this wonderful community of international cinephiles.

75 international speakers
Many of the originally scheduled presenters agreed to experiment with an online edition, and the symposium turned out to be a nice mix of live talks and live-stream screenings with texts and video presentations posted on the NYU Orphan Film Symposium website. Contributions came from all over the world: from the Bahamas, Argentina and Chile to Poland, Senegal, Sweden and Australia.

Water, Climate & Migration
On the symposium website, Dan Streible (NYU, Founder and Director of Orphans) and Eye’s Chief Curator Giovanna Fossati explain why the three conference themes were selected. For the online event, Fossati also put together a playlist on the theme of “water”, with nine short films from the period 1899-2020. In the most recent short film “The Film Treasures of Eye”, 68 mm material is projected onto the walls and interior of an empty Eye building during the lockdown period.
The playlist also includes some 1-minute film compilations from students of Fossati’s course “This is Film! Film Heritage in Practice”, made with archival material and inspired by the conference themes. All eight student compilations can also be watched on the Eye International Conference website.

New Eye Restorations: Work by Henri Plaat
Eye was also present at the online symposium with a video essay by Eye’s Senior Curator Expanded Cinema Mark Paul Meyer. He gave a presentation about visual artist Henri Plaat (1936), one of the key figures of experimental Dutch cinema who is hardly known outside the Netherlands. For Orphans online, Eye offered streaming access to two of the ten experimental short films that Eye digitally restored in 2020. Eye has curated two distribution programs with the ten restored films by Henri Plaat (“The Poetics of Memory and Decay” and “The Poetics of Wonder and the World”).

Helen Hill Award for Martha Colburn and Jaap Pieters
A recurring part of Orphans is the Helen Hill Award ceremony. Helen Hill Award recipients of Orphans 2020 were filmmakers Martha Colburn (Los Angeles) and Jaap Pieters (Amsterdam). Eye has been working closely with both artists for years. Their work is part of the collection. During the event, the makers were interviewed by Simona Monizza (Eye Curator Experimental Film) and Marius Hrdy (Former Eye Curator-in-Residence). A video portrait of Pieters by Eye Senior Curator Expanded Cinema Mark-Paul Meyer was also screened, along with four films by Martha Colburn, including two works that have recently been restored by Eye.

Watch it back
On the NYU Cinema Studies Vimeo site, most of the live stream presentations can be seen again. The posted video essays and articles will also remain available on the Orphans website.