The third edition of ‘A Season of Classic Films’ was presented today at the EU Pavilion in Cannes when ACE (Association des Cinémathèques Européennes) reveals details of the new programme running June to December 2022 in European cinemas and online. 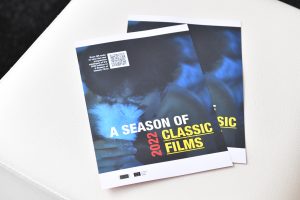 A Season of Classic Films

‘A Season of Classic Films’ is a series of free screenings designed to attract younger audiences to our shared cinematic cultural heritage. The programme looks to raise awareness of the work of European film archives, connecting the public with cinema history and the significance of film preservation. Most of the films are new digital restorations, and some screenings include dynamic elements such as live music performances and educational interactive sessions. All films are available with English subtitles.

Twenty-two film archives from 21 European countries (all ACE members) will participate in the classic film season, and each archive has selected a film or film compilation from their own collection to restore and present.

Additionally at the event in Cannes, ACE presented the Joint Restoration Grant of €50,000 awarded for the restoration of the film Life of a Shock Force Worker (1972). The jury, comprising filmmaker Sergei Loznitsa, Pordenone Silent Film Festival director Jay Weissberg and director of the Cinema-Fiction Department of ARTE Claudia Tronnier, selected the film from a raft of proposals submitted by European film archives.

Four partner institutions from Slovenia, Croatia, Austria and Bosnia are joining forces to restore Life of a Shock Force Worker, a wonderful example of Yugoslavian New Cinema. Inspired by daily life in a coal mine, the film critiques the political regime of the era, all the time illustrating the state ideology of comradeship and unity. It further offers a clearer and more nuanced view of Yugoslavian film history, one of the blind spots on the map of European film heritage, and at the same time touches upon the pertinent matter of propaganda in our post-truth era.

“Large parts of the Yugoslavian film heritage have so far been underserved,” the jury writes of its choice. “Life of a Shock Force Worker has strong imagery, but it is in desperate need of colour grading since the original has faded with time. A key asset is that ACE and the four partner institutions responsible for this restoration project will collaborate with DoP Karpo Godina.”

During the war in Bosnia in the 1990s, film director Bahrudin Bato Čengić deposited a 35mm print of the film at the Slovenian cinematheque, while the image and sound negatives remain at the Croatian state archive. Post-restoration, the film will be offered in a new 2K edition with the support of the EU Creative Europe MEDIA programme and the Ministry of Culture of Republic of Slovenia.

This year’s ‘A Season of Classic Films’ promises to offer very much an in-person series of events and presentations within European cinemas. Most of the films will also be available online to allow for a greater reach to international audiences, building up on the experience gained during the previous edition.

“The second edition of A Season of Classic Films took place when most of our public venues were closed for long periods of time,” says ACE President Sandra den Hamer, also Director of Eye Filmmuseum. “Nevertheless, European cinematheques actively connected with their audiences through online screenings, new streaming platforms and/or hybrid events. ‘A Season of Classic Films’, as a joint project, again strengthened the collaboration and solidarity between the participating film institutions.”

The Cannes ‘A Season of Classic Films’ presentation took place on May 23 at the EU Pavilion. The event was moderated by Paulina Reizi (Eye Filmmuseum, Coordinator of A Season of Classic Films). Speakers and special guests included Sandra den Hamer (President of ACE and director of Eye Filmmuseum), Sergei Loznitsa (Filmmaker), Claudia Tronnier (Director of the Cinema-Fiction Department at ARTE) and Jay Weissberg (Director of the Pordenone Silent Film Festival).