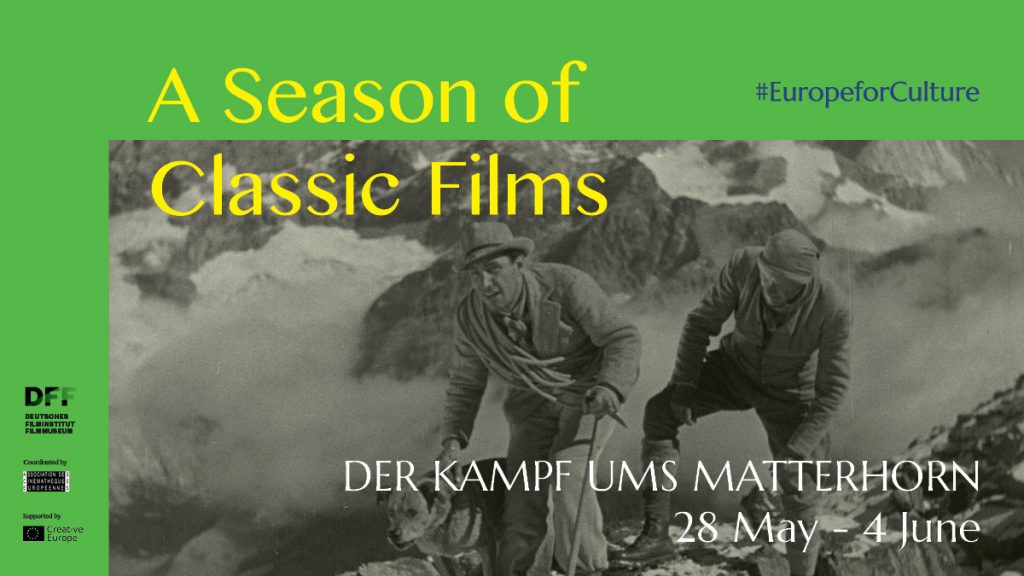 On the occasion of a newly arranged music recording, the DFF – Deutsches Filminstitut & Filmmuseum will screen the film Der Kampf ums Matterhorn (Fight for the Matterhorn, DE 1928, D: Nunzio Malasomma/Mario Bonnard), digitised by the DFF in 2016, on Friday 28 May, at 7 p.m. on its YouTube channel.

The special screening is made possible thanks to A Season of Classic Films, an initiative of the Association des Cinémathèques Européennes (ACE) with the financial support of the EU Creative Europe MEDIA programme. Twenty-two film institutions from all over Europe, including DFF – Deutsches Filminstitut & Filmmuseum, are taking part this year in A Season of Classic Films. The initiative offers free access to restored European films, connecting the public with cinema history and the preservation of film heritage.

In this year’s edition, the DFF dares to bridge the gap between silent film and electronic music: together with Leopold Hurt, the Teichmann brothers depart here from the familiar paths of classical silent film music. The experience of historical works could thus be opened up in a new way for a curious audience interested in music. Their improvisation based on musical motifs by Peter Kiesewetter and Giovanni Girolamo Kapsperger was rearranged especially for the current livestream.

The recording of the live stream will be available on the DFF YouTube channel for one week after its premiere.

Based on the historic first ascent in 1865, FIGHT FOR THE MATTERHORN focuses on a male relationship and a borderline experience: The obsession to conquer the Matterhorn unites the British sportsman Edward Whymper and his Italian counterpart, the local mountain guide Anton Carrel, played by Luis Trenker. Instead of conquering the climb as a team, however, a tough race ensues. With Luis Trenker and Arnold Fanck, two of the most important pioneers and masters of mountain films were involved in the production. The leading actor Trenker was also the production manager. He also took charge of the exterior shots on the Matterhorn, and his cameraman was Sepp Allgeier, already known in 1928 for his magnificent shots at frosty heights.

About the Film Restoration

The DFF’s elaborate reconstruction of the original German premiere version, directed by Anke Mebold, was accomplished in 2016 in collaboration with HTW Berlin. The work on the restoration turned out to be extremely difficult: Neither the original negative of the film nor the theatrical prints or the censorship card of the German premiere version have been preserved. The most important sources for the digital reconstruction were film prints of the French and Czech export versions as well as fragments of a 16mm positive from the 1930s. The missing intertitles in German could be added on the basis of the censorship card of this 16-mm reissue version.

About the Musicians Teichmann / Hurt

The cooperation between Berlin-based producers and DJs, Andi and Hannes Teichmann (live electronics), and composer and zither player Leopold Hurt goes back to a joint performance at the Munich Zither Festival in 2001. What was then a spontaneous project developed into a long-lasting collaboration as a live-electronic chamber music formation.

The trio’s music is characterised by its stylistically unconstrained approach: an uninhibited, always surprising work with sounds that never try to disguise their different origins – from new music to authentic folk music, from pop-derived harmonies to experimental electronics.

In many cases, the sounds of the (electric) zither played live form the starting point for concentrated further processing. The deliberately analogue setup of Andi and Hannes Teichmann gives the music an additional, very personal colouration.