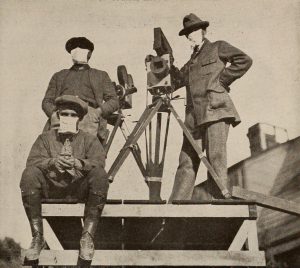 The current health crisis has led the organizers of the Pordenone Silent Film Festival/Giornate del Cinema Muto to shift the 2020 programme selected by director Jay Weissberg to 2021. For 2020 to organize 8 days of thematic screenings and events, between the 3rd and the 10th of October, the world’s leading film archives have been chosen as the Festival’s co-producers, offering them the opportunity to present some of their treasures online to the Giornate’s audience during the established dates.

With the aim of making the archives the actual protagonists, the Festival is working with a number of major international film archives including the Library of Congress in Washington D.C., Lobster Films in Paris, Det Danske Filminstitut in Copenhagen, the China Film Archive in Beijing, EYE Filmmuseum in Amsterdam, the National Film Archive of Japan in Tokyo, together with the Cineteca del Friuli, co-founder with Cinemazero of the Pordenone Silent Film Festival.

The selection will feature rarely seen films as well as recent restorations, all paired with musical accompaniment. Included in the online event will be streamed discussions with archivists, musicians and film scholars, as well as the 35th year of the Jean Mitry Award presentations. A bilingual catalogue will be downloadable on the website. More information will appear on the website well in advance of the festival dates, 3-10 October 2020, including the full list of the archives that are contributing to the Giornate.

To reinforce the ties between the Festival and international public, a new blog has been launched called La Gatta Muta; or The Silent Cat created by director Jay Weissberg and hosted on the Giornate’s website. Its aim is to stimulate discussion, highlighting storytelling as a path towards rediscovery. To read the first post click on the following link: http://www.giornatedelcinemamuto.it/la-gatta-muta-or-the-silent-cat-blog-jay-weissberg/