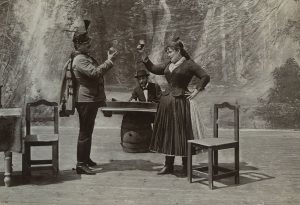 On April 30th 2021, The Dance, the first Hungarian film, will celebrate its 120th birthday and for this occasion the National Film Institute is launching a series of programs.

As the opening event of the series celebrating 120 years of Hungarian cinema, the National Film Institute will hold the Hungarian Film Day on April 30, the 120th anniversary of the famous day, when the works of Béla Zsitkovszky and Gyula Pekár, The Dance, were presented. Only photographs of the first Hungarian film have survived.

As part of the celebration, the National Film Institute is launching an International Motion Picture Research Program to search for, make accessible and, if possible, repatriate Hungarian and Hungarian-related film historical heritage. More than a third of the films made during the 120 years of Hungarian film history – including the first film, The Dance – are still lost or lost. “The digitization of collections, the active involvement of the National Film Institute in the International Association of Film Archives and the online space provide conditions for finding and identifying films that we could not have dreamed of decades ago. ” – said György Ráduly, director of the NFI Film Archive.

In July , a large film history exhibition entitled The Wide Angle will be opened at the Ludwig Museum in cooperation with the NFI, which will explore the rich history of Hungarian film from its beginning to the present day. The exhibition is accompanied by screenings at the Ludwig Museum, the Budapest Classical Film Marathon, the Valley of Arts in Kapolcs, film clubs and the open air throughout the entire country.

On the occasion of the jubilee year, the National Film Institute is also making a 12-part educational film series entitled The Adventurous History of Hungarian Film. During the year, the public can get to know the 120 specialties of the Film Archive’s library on Facebook, and more articles will be published on the website of the 120-year-old Hungarian film.