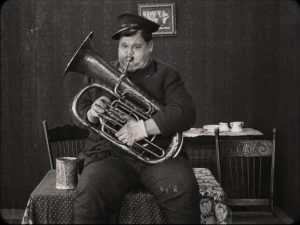 Le Giornate del Cinema Muto festival from Pordenone (Italy) will close with a big event via streaming and in presence. Thanks to Lobster Films from Paris and to the American Library of Congress, Stan Laurel and Oliver Hardy will be the protagonists of the special closing event “Laurel o Hardy” available on streaming at 8:30 PM CEST Saturday 10th October with a live musical accompaniment by Neil Brand. The event will be repeated the following day in presence at 4.30 PM CEST at the Verdi Theatre in Pordenone with a live musical accompaniment by the Zerorchestra.

The films screened during this event want to highlight the genius of Laurel and Hardy that was evident even before they first teamed up. Le Giornate del Muto have decided to present 5 riotous shorts that precede their legendary partnership, each one joyfully showcasing their individual talents.

There are two short films with Hardy, The Serenade (1916) and The Rent Collector (1921), directed by and starring Larry Semon. Stan Laurel can be seen acting in Detained (1924) by Percy Pembroke and Joe Rock and in When Knights Were Cold (1922). The highlight of the program is the world premiere of Moonlight and Noses (1925), which sees Laurel as director and screenwriter. The film has been restored by integrating the existing copy with a 16 mm copy from the National Film & Sound Archive in Canberra.

The “Laurel o Hardy” program will be preceded in the afternoon (at 5:00 PM CEST) by the new restoration of Ballettens Datter (1913) by Holger Madsen. The restoration has been cured by Danske Filminstitut.