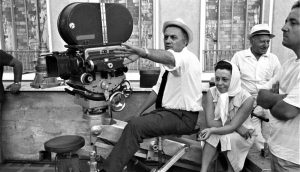 The year 2020 marks the 100th anniversary of the birth of the legendary Italian director, Federico Fellini. This is how Fellini100 was born, an Italian celebratory project supported by eight Institutions: Ministero degli Affari Esteri e della Cooperazione Internazionale, Regione Emilia-Romagna, MiBACT, Comune di Rimini, Cineteca di Bologna, Istituto Luce-Cinecittà, Cineteca Nazionale and Museo Nazionale del Cinema di Torino. Many ACE members have decided to take part to this project, organizing events to celebrate the genius of this director. There are just a few of the many initiatives:

BFI has scheduled screenings covering virtually all of his oeuvre, from Il Bidone (1955) to La Voce della Luna (The Voice of the Moon, 1990) through unforgettable classics such as La Strada (1954), complete with Q&A talks from scholars and curators.

The National Audiovisual Archive (KAVI) has decided to screen three of Fellini’s movies from Cineteca Nazionale: I Vitelloni (1953), presented in a new restored edition for the centenary, Il Bidone and Le Notti di Cabiria, all presented in 35mm.

Filmoteca de Catalunya has decided to celebrate Fellini with the event “Amarcord Fellini”: the restrospective will take place in February, but will be anticipated in January by some of his shorts: Agenzia Matrimoniale (episode of L’Amore in città), Toby Dammit (episode of Tre passi nel delirio) e Le tentazioni del Dottor Antonio (episode of Boccaccio ’70).

Cineteca di Bologna hosts the exhibition Federico Fellini per Renzo Renzi with eighty drawings by the director and will also screen five of his most iconic films – Lo Sceicco Blanco (the White Sheik, 1952), I Vitelloni, La Dolce Vita (1960) , 8 ½ (1963) and Amarcord (1973) – recently restored as part of the ‘Il Cinema Ritrovato’ incentive.