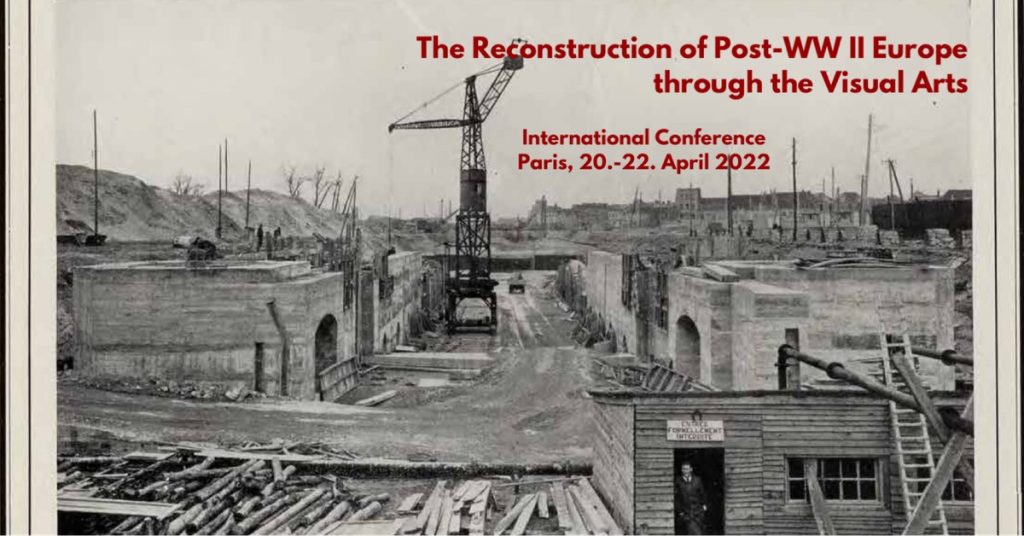 Having survived World War II and the bombings of the Liberation gave a new impulse to a whole post-war generation. The innovative modernity of the architects who rebuilt the destroyed cities, the commitment of the construction workers who worked in perilous conditions, and the establishment of new, temporary peaceful diplomatic relations inspired a rich visual and artistic production.

Organized in the framework of the research project Visual Culture of Trauma, Obliteration, and Reconstruction in Post-World-War II Europe (www.victor-e.eu), this conference will take place 20-21-22 April 2022 in Paris, at the Institut National d’Histoire de l’Art (INHA). Itwill bring together the viewpoints of historians, visual sociologists, and historians of art, cinema, architecture, photography, painting and other related visual media on the period of Reconstruction following the Second World War in Europe. The research on the challenges of the post-war period, which began in the 1980s, has been fruitful but is only including visual sources since the 2000s. The increased digitization of archival collections, in particular iconographic and audiovisual holdings, encourages the exploration of the Reconstruction period through the rediscovery of these new objects.

While the research carried out within the ViCTOR-E project has mainly focused on non-fiction cinema, this conference aims to explore the cinematographic corpus as an extended visual arts ensemble. By examining the repetition of patterns and the circulation of aesthetic representations between cinema, photography, architecture, painting, design, and comics, it will explore the correspondences and influences that were developed between these different artistic expressions during the key period of the mid-20th century and which can be still found in the contemporary visual culture.

Usually the Reconstruction is depicted in its regional or local dimension, but this bilingual conference proposes to vary this conception, by bringing to light the transnational links that have strongly influenced the post-war transformations. These transnational exchanges, whether in the form of architectural influences, assistance from international organizations, or reports and travels abroad, contributed to the rebuilding of destroyed cities, while sometimes initiating longer-term collaborations.

This double exploration of the transdisciplinary and transnational dimensions of the Reconstruction will be the main theme of the conference. Proposals for communications may be submitted under the following themes:

– The circulation of a pattern (ruins, new infrastructures, modern housing, etc.) or a place (a city, a monument, a public space) through several artistic forms;
– The transnational dimension of the Reconstruction: international events (festivals, exhibitions, meetings), supranational institutions (UNESCO, UNRRA, etc.), political and cultural exchanges between different countries;
– The individual trajectories of the figures who acted as intermediaries between the different arts and fields (collaborations between architects and photographers, between engineers and filmmakers, etc.);
– The role of visual arts and production in dealing with, or instead in concealing, the traumatic heritage of the war;
– The long period of the Reconstruction, on the one hand through the question of contemporary uses of the archives of the Reconstruction, and on the other hand through the overlapping of the issues of the Reconstruction with those of the second half of the 20th century (in particular the beginnings of the cold war and the decolonization).
This conference will be the final public event organized by the ViCTOR-E project. Its team members will have the great pleasure to introduce the virtual exhibition created by the Czech, French, German, and Italian units, together with the European Film Gateway.

Please send your abstracts (200 words, short bio) in English or French to: victore.conference@gmail.com

The project VICTOR-E is financially supported by the HERA Joint Research Programme (www.heranet.info) which is co-funded by BMBF via DLR-PT, CAS, ANR, MIUR and the European Commission through Horizon 2020.