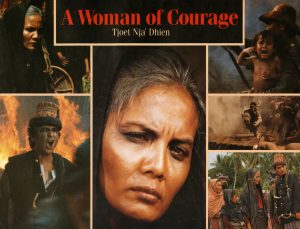 Tjoet nja’ Dhien is an epic anti-colonial film about the Aceh war, the long and bloody struggle against the colonial Dutch rule in the sultanate of Aceh in Indonesia. This aesthetically shot film portrays the unique character of the female guerrilla fighter Tjoet nja’ Dhien. After her husband and rebel leader Teuku Umar is killed in an ambush, she takes on the Dutch colonial army herself and starts leading the numerous guerilla warriors of Aceh. Watch the film free of charge on Eye Film Player.

The film, often praised for its delicate lighting, covers the period from 1876 to 1906. In 1871, the independence of the Aceh sultanate in northern Sumatra came to an end when the Dutch placed it under colonial rule. Aceans, known for their courageous characters, resisted fiercely, which led to a bloody war that lasted for decades. Teuku Umar, one of the most important resistance leaders, married Tjoet Nja Dhien in 1880, who was also part of the resistance movement. When Umar died, she set herself up as the new, charismatic, and fearless leader and remained so for ten years. As her deeds became legendary, she was proclaimed a national heroine in 1964.

restoration
On May 20th 2021, the restored version of this captivating film premiered in Jakarta. This restoration was carried out by Eye Filmmuseum and ID FilmCentre in 2017 and 2018, in close collaboration with director Eros Djarot and producer Alwin Abdullah.