The question of intellectual property in the digital era is at the very centre of the public debate and has also begun to draw the attention of scholars and researchers. Interested in the interplay between early cinema practices and contemporary developments,  the XX Udine International Film Studies Conference calls for papers on the following topics: The original and the copy, Plagiarism and imitation, Author and authors, Referent and image, Property and the archive.

filmforum is an international festival devoted to cinema and the contemporary visual arts that takes place in Udine and Gorizia, Italy.

3 September 2012 – This year’s Cinema Expert Group – Subgroup Film Heritage takes place at the Cinematek in Brussels on 16 October 2012. The Cinema Experts Group is annually organised by the Audiovisual and Media Policy Unit of the European Commission, where experts from all over Europe meet to discuss best practices and policies related to film heritage.  Attendance to the meeting is by invitation only. Agenda updates and related documents are available on http://ec.europa.eu/avpolicy/reg/cinema/experts/index_en.htm

29 August 2012 – Presentations made at the ACE workshop “A digital agenda for film archives”, held on 28 June in Bologna, are now available online.  26 experts from 18 European countries discussed the practical, financial and political impacts of digital archiving. It was the 1st in a workshop series called “Management strategies for film archives in the digital era”, which will be continued in 2013.

6 June 2012 – The Austrian Film Museum has recently published its flagship online video project: “Kinonedelja – Online Edition”. 14 of the original 43 issues of the early Soviet newsreel series “Kinonedelja” (Kino-Week) survive in the Austrian Film Museum’s collection. The newsreels, which date from the years 1918 and 1919, are not merely significant for their depiction of life in the young Soviet Russia during the civil war, but also because they represent Dziga Vertov’s first contribution to cinema.

The films of Dziga Vertov have always played a key role in the collection, preservation and publication activities of the Austrian Film Museum since its foundation in the 1960s. It is therefore apt that his first films should also be the first films presented on the Film Museum’s website. The films are available to view in full length and full translations of the inter-titles are provided in both German and English.

4 May 2012 – The 5th edition of the Film Restoration Summer School / FIAF Summer School will take place in Bologna from June to July 2012. The project is organised and hosted by Cineteca di Bologna in collaboration with ACE and FIAF. The main objective of the Summer School is to teach and update participants on how to restore and preserve a film through the use of photochemical and new digital technologies. It is designed for both for archivists and staff working at FIAF archives, and students. For the Festival Edition 2012, ACE awarded  a scholarship to five applicants.

Programme and timetable 2012
On-line Distance Learning: 9 May- 20 June (on Wednesdays)
Theory Classes: Bologna, Il Cinema Ritrovato Film Festival, 23 – 30 June
Restoration Practice: Bologna, 2 – 13 July During the internship, participants are supervised by international experts and laboratory staff to put into practice what they learned during their first week of theory.

Please find more information, the full programme and the list of the 36 selected participants here.

The final report of the Study on a Digital Agenda for European Film Heritage is available on-line.  The Study was launched in January 2011 to assess the impact of digitisation for European film archives. It has been conducted  by peacefulfish Productions Ltd, subcontractors were Red Cat Technologies, the University of Helsinki/IPR University Center and the external expert Nicola Mazzanti. Read the full report. More information on the DAEFH study

20 September 2011 –  From 27 to 29 September, the Conference “Importing Asta Nielsen. Cinema-Going and the Making of the Star System in the Early 1910s” will take place at the Deutsches Filmmuseum, Frankfurt. Asta Nielsen has been the first female star who received international reputation. Her name is inextricably linked to the advent of the long feature film and the invention of the star system. During the 3-day conference, film historians and researchers will discuss the various modes of distribution, exhibition, appropriation and reception of Asta Nielsen within countries of all continents.

To register, please send an email to nielsen@deutsches-filminstitut.de 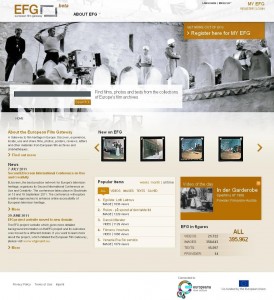 27 July 2011 – After nearly three years of preparation and development, the European Film Gateway – EFG is now online. The portal to the digital collections of European film archives and cinémathèques offers free access to currently about 400,000 digital videos, photos, film posters and text materials. By September, the number of digital items will increase to 600,000 from 16 film archives.

“The European Film Gateway creates a central online access to Europe’s film heritage for the first time. Previously, this remarkable record of 20th century European cinema had been dispersed on different national platforms,” says Claudia Dillmann, director of the Deutsches Filminstitut, which co-ordinates the project. “Now the films and information about them are more accessible, not only to scholars, journalists and creatives, but also by a broader audience interested in film.”

FG also provides access to material in film archives that was hitherto hardly known, and some is now online for the first time,” says project manager Georg Eckes. These include unique magic lantern slide collections from France, erotic films made in Austria in the early 20th century, advertising films from Norway, newsreels from Lithuania and a comprehensive film poster collection from Denmark. Hidden treasures can be discovered from 15 European countries. Cinecittá Luce from Rome, for example, contributes not only a famous Italian newsreel collection reporting on important film-related events and persons, but also a fine collection of early films by great masters like Rossellini, Antonioni, Comencini, and other famous names of Italian filmmaking. An extensive collection of set photos to films of Rainer Werner Fassbinder contributed by the Deutsches Filminstitut will be available for the first time online from August on.

Users of the portal can search for people, for example Marlene Dietrich, but also by film title or keywords. They get an overview of related digital objects from the film archives which can be viewed directly in the portal. The portal always links back to the website of the relevant archives, and therefore also works as a search engine for selected digital holdings of European film archives.

EFG is a component of Europeana, the platform for the cultural heritage of Europe. EFG gathers the indexing and access information, so-called “metadata”, and provides it to Europeana in a structured form. By doing so, the European Film Gateway and Europeana bring together the collections of European film archives with holdings of libraries, archives and museums in Europe, and put them in a transnational and multicultural context.

The EFG portal is the result of the EFG project which was developed by the Deutsches Filminstitut together with the Association des Européennes Cinémathèques and its members. It started in September 2008 and will end in September 2011. The coordination of the project lies with the Deutsches Filminstitut in Frankfurt am Main. It will operate the site on behalf of the project partners even after the project period has ended. The technological infrastructure was provided by the IT research institute of the Italian national research council, CNR-ISTI in Pisa. The project was funded by the eContentplus Programme of the European Commission.

8 June 2011 – More than 10,000 titles of dossiers relating to films, personalities and other categories can now be researched online. Within the next years, this number will increase to over 50,000 dossiers.  The database allows he materials themselves cannot be displayed or downloaded. Detailed information about the content of each individual dossier can be obtained by an online request. The “results list” represents the materials held by the Museum, which can then be viewed on-site with requests made in advance.

Acquisition of film-related materials and documents by the Film Museum dates back to the founding of the institution in 1964.

The collection contains materials and documents produced throughout the process of making movies, such as treatments, scripts, promotional materials, press kits, screening invitations, advertisements, reviews, distribution catalogs, magazines, newspaper articles and clippings, as well as unbound documents which may contain brief film descriptions or production-related information. These documents include filmmaker bios and filmographies, interviews, obituaries, and correspondence including letters, postcards and greeting cards. Another aspect of the collection is focused on film festivals, exhibitions and retrospectives, as well as technical developments in cinema and film projection, represented through materials such as program notes, exhibition catalogs, brochures and manuals.

These materials are stored in acid-free paper envelopes (numbered consecutively) in files separated into categories: Film, Personalities, Institutions, Companies, Film Festivals, Exhibitions/Retrospectives, and Technical. The file titles and groups are searchable via the database. Screenplays, along with festival and rental catalogs are stored separately.

It is the Museum’s policy to make as many materials as possible available to students as well as scholars. Open and “barrier-free” access to the collections via online search helps create transparency as well as a connection to both academics and researchers.