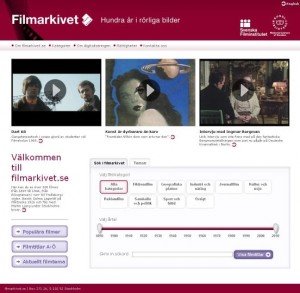 20 February 2011 – As of 10 February 2011, more than 300 archival films are available online for free at filmarkivet.se, a joint project between the Swedish Film Institute and the National Library of Sweden. The majority of the films originates from the Swedish Film Institute’s Archival Film Collections; mainly shorts, non-fiction films, newsreels and commercials – films that reflect the transformation of Swedish society over the last century.

The selection of films is being done by an editorial board with representatives from both institutions. Many of the films selected are virtually unknown but the locations, events and people depicted in them are very familiar. Each film is presented with a short synopsis and production credits. Many also contain longer texts to put the films into context.

Besides an English project description, filmarkivet.se  is available in Swedish only.