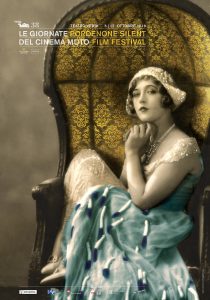 The 38th edition of Le Giornate del Cinema Muto will take place between the 5 and the 12th of October 2019 at Teatro Comunale Giuseppe Verdi in Pordenone (Italy). The festival, organized by La Cineteca del Friuli, will showcase more than 200 movies between short and feature films. This year’s poster pays homage to Marion Davies with a photo taken by the great photographer Ruth Harriet Louise on the set of Beverly of Graustark. The two main themes of the 2019 edition are comedy and the strong female presence in all sections.

The opening event, which will take place on Saturday 5th of October at 20.30, is The Kid (1921) with a live performance from the Orchestra San Marco of Chaplin’s sheet music. “It may seem strange, but in the lengthy history of our festival we have never screened The Kid. This gap will be filled on the occasion of the 130th anniversary of Chaplin’s birth”, explains the festival. The closing event will be The Lodger – A Story of the London Fog (1927), Alfred Hitchcock’s third movie in which we can already clearly see his future trademarks. The new score, composed by Neil Brand, will be executed by Orchestra San Marco directed by Ben Palmer.

Some events we would like to highlight are the screening of Oblomok Imperii (1929) by Fridrikh Ermler, restored by EYE Filmmuseum, Gosfilmofond of Russia, San Francisco Silent Film Festival with the help from Cinémathèque Suisse, and The Moment Before (1918) restored by La Cineteca Nazionale.

Le Giornate del Muto will host retrospectives dedicated to the origins of European slapstick, to “Nasty women” and flipbooks. Many strong female personalities will be honorated during the festival such as Suzanne Grandais, Mistinguett, Elettra Raggio and Joan Crawford.

The festival highlights every year the film heritage of countries that are considered “marginal”. This year’s focus is Estonia, a nation with a small but lively film production that will screen some films from the Estonian Filmmuseum.