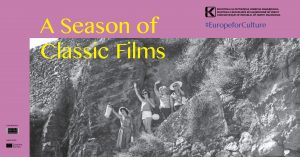 The film tells the story of Mira and Zare, a young couple yearning for their summer peaceful vacation by the lake. They will get a chance to escape from it all when Zare, who is an anthropologist, is put in charge of the renovation of an old house by the Ohrid lake. The house is set to become part of the local ethnographic museum and he will spend the summer to develop the interior and the collections, while Mira hopes to paint and relax. The long-awaited retreat for the couple turns into a revolving door of uninvited relatives and friends who they thought they left behind in the city.

This is the premiere of a new 2K restoration to celebrate the film’s 60th anniversary, one of the most beloved films in the country as it is regarded as the first comedy produced in the Macedonian language. Upon its release in 1961, the film was a great success with more than 25.000 people watching the entertainment sensation in the two cinemas where the screenings were available.

The only surviving black and white internegative acetate print of Mirno Leto, preserved by the Cinematheque of North Macedonia, has been digitally restored. There are no complete original negative prints and only positive copies survive from past cinema distribution that are in a really bad condition and not adequate for screenings. The internegatives were scanned in 2K and processed by Click Film lab in Zagreb, Croatia. The sound was also digitally restored and a new 2K master was completed from which a DCP and other digital versions for access and archiving purposes are now available.

The premiere of the new restoration on 11 June will be introduced by Atanas Chuposki, Senior Filmologist at Kinoteka as well as a mini concert. 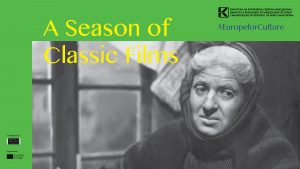 This is also a new restoration premiere. The film recounts the life of Frosina, who faces the fear of losing her only surviving child in the fight for freedom. The archetypal story of the mother devoting her life to raising children and taking care for her spouse and family interrogates the role of woman as a hero or a martyr for denying herself and her needs. Frosina is considered as the beginning of the feature film production of North Macedonia.

These two new restorations and special free-admission screening events are made possible thanks to A Season of Classic Films, an initiative of the Association des Cinémathèques Européennes (ACE) with the financial support of the EU Creative Europe MEDIA programme. Twenty-two film institutions from all over Europe, including the Cinematheque of North Macedonia, are taking part this year in A Season of Classic Films. The initiative offers free access to restored European films, connecting the public with cinema history and the preservation of film heritage.