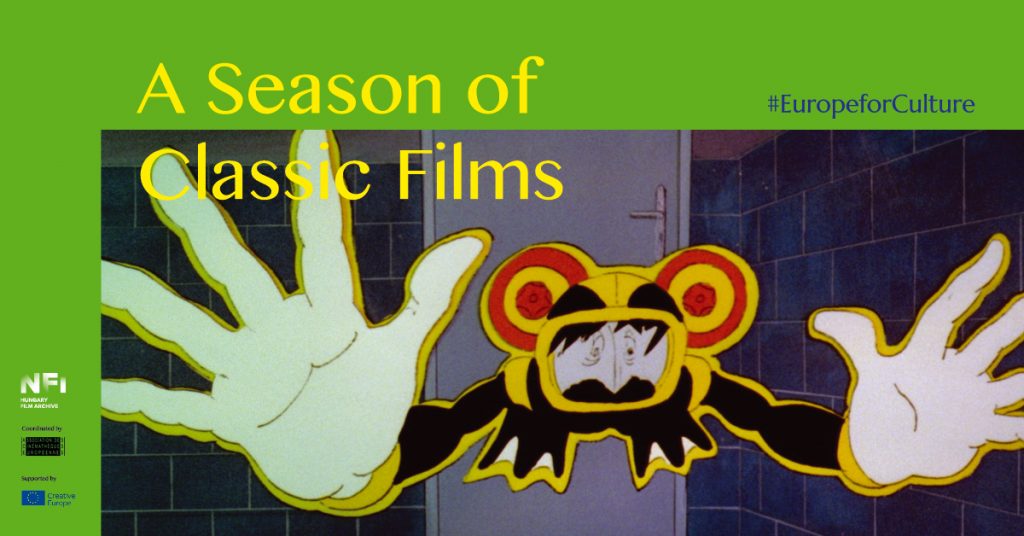 The National Film Institute Hungary – Film Archive (NFI – Film Archive) is presenting the recently restored animation cult film Bubble Bath (Habfürdő) online. The film will be free-to-view worldwide with English and French subtitles on two occasions on the NFI – Film Archive’s YouTube channel: the first screening starts at 7 pm on 15 May, birthday of the director György Kovásznai, and there is a repeat screening the next day, also at 7 pm.

The new restoration in 4K and online release of Bubble Bath (Habfürdő) is made possible thanks to A Season of Classic Films, an initiative of ACE (Association des Cinémathèques Européennes) with the financial support of Creative Europe. The goal of A Season of Classic Films is to encourage the restoration of European film art and, through free-admission screening events online and in cinemas when possible, to draw attention to the work of European film archives. Twenty-two institutions from all over Europe, including the NFI- Film Archive, are taking part in the initiative, connecting the public with cinema history and the preservation of film heritage.

György Kovásznai (1934–1983) is a pioneer of Hungarian animation. His animated short films working with boldly expressive graphics and experimental soundscapes carved a niche in the genre traditions in Hungary. His first and only feature film, Bubble Bath debuting in 1980, is one of the most remarkable highpoints on the domestic and international animation palette, which now has a serious fan base.

Bubble Bath went radically against the cartoons of the day made for children and based on classical literary foundations, which was launched in Hungary with János vitéz (Johnny Corncob, 1973) and Lúdas Matyi (Mattie the Goose-Boy, 1976). It is not surprising, therefore, that Kovásznai’s film, with a contemporary setting and designed specifically for an adult audience, was received with incomprehension by contemporary viewers, it divided opinion among film professionals and was taken off cinema programmes after just a few weeks. At the same time, the ground-breaking style of Bubble Bath still influences younger generations of animation directors to this day.

In an approach ahead of its time, numerous film forms (musical, romantic comedy and sociological documentary) are mixed up in the hybrid-genre experimental film, the subtitle of which is ‘musical animation to the rhythm of a heartbeat’. The action takes place in Budapest’s downtown and it reveals the story of a love triangle: Zsolt, the middle-aged window shop decorator, runs away on his wedding day, fleeing to Anni, colleague of his attractive, worldly bride-to-be Klári, who works as a nurse and is preparing for her new role as housewife. At the moment Zsolt bursts in, Anni is studying for her fifth medical entrance exam in her rented room. Zsolt persuades Anni to call his fiancée and tell her he has changed his mind, he won’t be marrying her after all. Through the characters’ dissatisfaction with their own social situations, the film portrayed the disillusionment of the young generation of the 1970s in an extremely entertaining and yet grotesque way with a sociographical element. The characters were shaped on the basis of real models (the three main figures were drawn on the basis of fashion model Géza Girardi and actresses Kati Dobos and Irén Bordán), but in their movements an eclectic way of representation ranging from realism to complete abstraction prevails.

Bubble Bath achieved its documentary effect using the unusual solution of applying animated socio-reports based on genuine interview footage into the film’s fictional fabric. These reports were made in the waiting room of an actual mother and infant clinic. Kovásznai himself wrote the lyrics to jazz songs performed in the music segments, which were set to music by János Másik Jnr., who made his debut here as a film composer. The principal dubbing and vocals parts were made by opera singer Albert Antalffy, jazz singer Kati Bontovics, and actresses Kati Dobos and Anikó Papp.

Restoration of Bubble Bath, which is the third Hungarian full-length animation, was carried out within the film restoration and digitization programme of the National Film Institute in 2021, with the support of ACE and Creative Europe. Around 30 staff members of the Film Archive and Filmlabor functioning as directorates of the National Film Institute took four months to complete the full, 4K restoration of the film. Ethical issues of restoration were even more evident in the case of such a special film as Bubble Bath. The prolific visual elements, the figures created from rippling lines, the pop-art lights and colours pulsating to the rhythm of the music posed the restorers with a challenge even greater than in other films: how far could they intervene in the image without violating the original concept; flicker-free technology should not eliminate the original flicker, software should leave untouched all the original, constantly evolving mass of lines. Luckily, the film’s cinematographer Árpád Lossonczy and its composer, the outstanding figure of Hungarian alternative music János Másik, were available to restore the tonal palette and optimal audio of the film according to the original, assisting the work of the colourist and audio restorer.

 Live stream direct access link (accessible only on 15 & 16 May)

A SEASON OF CLASSIC FILMS: TRAILER