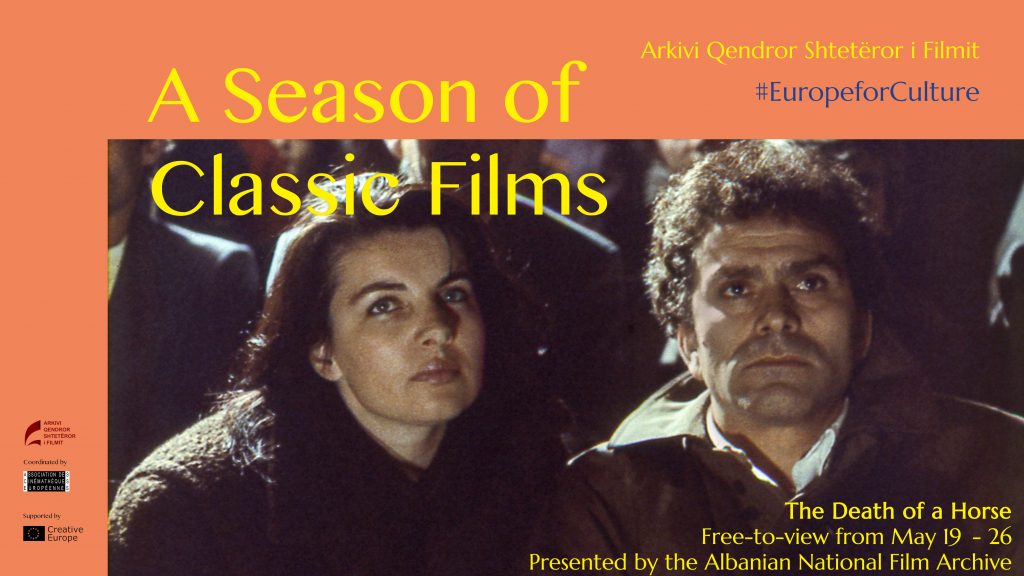 The Albanian National Film Archive offers free online access to the drama The Death of a Horse (Vdekja e Kalit) on its YouTube channel between 19 and 26 May.

 Watch The Death of a Horse

Based on a true story, The Death of a Horse (Vdekja e Kalit) carries the distinction of being Albania’s first dramatic fiction film made after the end of its communist era.

In 1991, many Albanian filmmakers confronted the legacy of Enver Hoxha’s dictatorship. One of the most prolific of the former Kinostudio directors, Saimir Kumbaro (b. 1945) and screenwriter Nexhati Tafa (b. 1952), along with some of Albania’s most iconic acting talents, crafted The Death of a Horse, a feature film that would have been unthinkable a year earlier.

Speaking about the film, Iris Elezi, Director of the Albanian National Film Archive said, “The low-budget conditions during the making of The Death of a Horse reflected many of the tremendous social and economic challenges Albania faced in the 1990s. But since the Balkan nation had only just emerged from the traumatic Hoxha era, The Death of a Horse has a fierce vitality, its story literally torn from the pages of its recent history”.

The drama takes place in 1974, a year in which the Albanian regime accused the military of treason. The Defence Minister was executed along with a high-ranking General, Petrit Dume.

The main character in The Death of a Horse, the horse trainer Agron, parallels the story of Petrit Dume. However, the fictional Agron is not a General but a military horse trainer who does all he can to save his beloved racehorse. But as he tries to rescue the white horse, Agron and his family get caught up in a series of tragic events.

In the context of preserving Albania’s endangered cinema heritage, the Albanian National Film Archive’s has acquired the 35mm original film elements, which showed signs of material decay. The film has been scanned under the supervision of restoration expert Shai Drori and the digital restoration has been completed by filmmaker Steven Kastrissios.

The restoration and free online release of The Death of a Horse are made possible thanks to A Season of Classic Films, an initiative of the Association des Cinémathèques Européennes (ACE) with the financial support of the EU Creative Europe programme. The goal of A Season of Classic Films is to encourage the restoration of European film art and, through free-admission screening events online and in cinemas when possible, to draw attention to the work of European film archives. Twenty-two institutions from all over Europe, including the Albanian National Film Archive, are taking part this year in the initiative, connecting the public with cinema history and the preservation of film heritage.